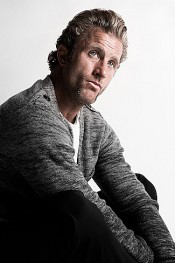 It seems that there’s no idle time for Scott Caan. When he’s not acting in films and on television, he stays busy as a photographer, director and writer for both stage and screen. In his newest screenplay and acting endeavor, Mercy, Scott plays Johnny Ryan a successful novelist who is releasing his third book. At his book party, he meets an alluring and beautiful woman named Mercy who turns out to be a book critic – the only critic who dislikes his newest novel. Determined to find out why she gave it a bad review, Johnny confronts Mercy. He eventually discovers what’s missing in his novel as well as his life and falls in love in the process. I spoke with Scott about his writing process, the current state of independent film, making Mercy and more.

What inspired you to write Mercy?

I have always been super fascinated about relationships and how they work and how they fail. I think people will be writing about that sort of thing for the next ten thousand years because there is no science to it and it’s something that boggles most people. Most of the things I write are based in the relationship genre and I definitely wanted to write a love story. Then, I was in Texas working on a movie with a friend of mine, Will McCormack, and we were watching the old Robert Duvall film, Tender Mercies. We were kind of obsessed with the movie and watched it a bunch. We said that we should write a love story about a character named Mercy. That’s sort of how the idea came about. Also, my friend had some experiences in his life where he had this girl that passed away and it sparked an idea. A year or two later, I was in Europe doing a movie and I had a lot of time off.  So I picked up the idea and started to write the script.

Did you ever take a screenwriting class?

I was in a theater group, Playhouse West, on and off for the past fifteen years. Reading all of the greatest plays ever written and working on them as an actor was a writing course for me. I started writing plays before I started writing movies. I feel that was as good as a playwriting class. I have read many screenplays because I was auditioning all the time and I was really obsessed with acting. My whole life was about being really committed to acting and I feel like the amount of scripts and plays I read was literally like a screenwriting school for me.

A lot of actors write their own scripts because they feel like they are not getting the roles that they want to play. Was that the case for you when you sat down to write Mercy?

The reason I started writing to begin with was because we were doing plays at Playhouse West and we were trying to get the rights to the plays, but we kept getting shut down. We would rehearse a play for a month while we are trying to get the rights and then we would get shut down. For one reason or another, we couldn’t find the right play. So when I started writing plays, it did come out of frustration to act in something that I really wanted to do. Ultimately, with the first movie I wrote, I said to myself, “I want to act this kind of a part.” But with Mercy, specifically, I wrote the script to direct it. I never wanted to play the lead part. I actually wrote it for James Franco. For one reason or another, he couldn’t do it. So to answer your question, most of the time I’m writing parts for myself, but that wasn’t the case with Mercy.

Why did you decide not to direct this film?

I had directed a couple of movies and, budget-wise, I had moved up.  I made my first movie for a million bucks. My second was made for just under two million. I didn’t want to go back and make a movie for less than a million dollars. At the time, I had a lot going on and I found this great director, Patrick Hoelck, who I really trusted. I respected him as a photographer and his knowledge of cinema. I knew that he knew how to tell a story. So I was pretty lucky and blessed to get him to make this movie. I figured that I hadn’t had any good acting parts in a long time, so this was the perfect opportunity for me to step in, do my part as an actor and really just focus on that. Then, I’d bow out and let someone else do the movie. Ultimately, I ended up producing it.

The conversations between you and your two close friends in the film were very realistic. Was this based on conversations you have had with your own friends during your life?

I started in this business really young and I think I’ve read more plays and screenplays than most people. I’ve also been lucky to have always had weird and interesting people in my life. I’m not the kind of writer who writes down conversations and puts them in screenplays. But I do have people in mind when I write. I grew up around the funniest people in the world. I have an uncle who is one of the most interesting people you will ever meet. I was around my dad’s friends as a kid and they are all about dialogue. It’s sort of in me. The combination of reading a ton, the people I have been around and the fact that I just had the bug to write really formed my style and the way I ended up writing.

You wrote some pretty deep scenes between your character and your father (played by real life father, actor James Caan) discussing love.  What do you think of his philosophies?

Ultimately, his point of view is that maybe loneliness isn’t so bad.  Maybe just being alone isn’t such a terrible thing in comparison to the pain and agony you can go through when you dive into love. Digging in is life. You can choose to not live life and you’re safe and you die kind of mediocre.  You say to yourself, “I didn’t try anything, but I also didn’t get hurt.” Then, there is the side of you that says, “You know what I am going to dig in.” And that’s sort of the undertone of the movie.