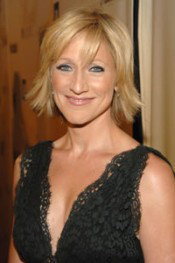 Edie Falco graduated from the acting program at the State University of New York at Purchase and made her Broadway acting debut in the Tony Award-winning play, Sideman. Falco has appeared in many popular motion pictures such as Cop Land, starring Sylvester Stallone, Robert DeNiro and Ray Liotta, Woody Allen’s, Bullets Over Broadway starring John Cusack and Chazz Palminteri and other top feature films. Falco has also acted in roles in highly acclaimed television shows such as Will & Grace, Law And Order, Homicide and the HBO dramatic series, Oz.

For her role as “Carmela Soprano in HBO’s The Sopranos, Falco became the first actress to ever sweep all three top American television awards by receiving the Emmy Award for Outstanding Lead Actress in a Drama Series, The Golden Globe for Best Performance by an Actress in a Drama Series and the SAG Award for Outstanding Performance by a Female Actor in a Drama Series. That was in the year 2000 and she’s been going strong ever since. In between the time spent on camera for The Sopranos, Falco continually performs on Broadway. I had a chance to chat with the award-winning actress about Italian food and how big family dinners have brought her loved ones together throughout the years.

Tell me about the role your cultural background played during your childhood.

I’m half Swedish and half Italian – Swedish on my Mom’s side and Italian on my Dad’s side. I was born in Brooklyn and lived as a child on Ainslie Street in the area called Greenpoint. My impression back then was that it was a very Italian neighborhood. We lived with my Dad’s Italian parents. His aunts, uncles and cousins all lived on Ainslie Street, as well. My memory is that the whole Falco clan lived on that same street. Then, my family moved to Long Island and that is where my family still resides to this day. My father is one of five children, so he has a very large family. My father’s side of the family comes from just outside of Naples. The concept of ‘Family’ is a big part of his heritage and background. My mother, being Swedish, has a very different kind of family orientation. Her side of the family is not as close and they don’t have the big Sunday dinners that the Italian side does. There is a very strong Italian identity and feeling to my immediate family.

Sunday dinners have been a big weekly event in Italian-American households for decades. Growing up, did your family always have Sunday dinner?

We moved around a lot on Long Island. However, no matter where we lived, every Sunday we would travel to my grandmother’s, who lives in East Northport, for a huge Italian dinner. My grandmother is the best Italian cook in the world. To this day, nobody can make meatballs like my grandmother who is 86 years old and still cooks. My family eventually moved to Northport, probably in part, for the family Sunday dinners. So, that move eliminated the tedious process on Sundays of packing up the car with the kids and driving there. After we moved to Northport, it was basically just a matter of going up the block to my grandmother’s house for the big traditional Sunday feasts. Over the years, it has diminished a little because some people have moved away.

How about holidays? Did the Falco’s celebrate with big feasts?

The memories of holidays for me are surely about food and what seems like millions of family members. It is about eventually graduating from the kids’ table to the big table with the grown-ups, which is always the way it’s done in Italian families. Memories include having already eaten too much food by the time the third of eight courses came out from the kitchen. I remember so many Thanksgivings with us all leaning back in our chairs totally full! Even though it is often deemed politically incorrect today, many of our family members smoked. Even in between courses, after the plates were cleared, family members would light up. Then, when everyone was done with their cigarettes, we would start the next round of food. My family also enjoyed wine, but they were never connoisseurs. They definitely enjoyed the taste of wine with a hearty Italian meal. Those big family dinners are the basis for some of my fondest memories growing up.

Have you had the opportunity to go back to Italy and explore your roots?

I’ve had the opportunity to travel to Italy and I am very happy about that. I was doing a movie in Italy and my sister came over with me on this particular trip. We thought that since our family had not been back to its roots since it originally came to America over when two sisters emigrated from Naples, it was time to re-trace those roots. It was great that after all these years, my sister and I decided to go back to Naples to try to rediscover our heritage. We didn’t have much information to go on in Naples to find the Falcos. I also didn’t have as much time as I would have liked to explore in Italy because I was working on that movie. We searched through the Naples, Italy version of the phone book and there were actually sixty-five pages of Falcos! It’s like the “Smith” of Naples, which I hadn’t realized. We walked all through Naples and met many families, but no luck. After spending a long time walking in various Naples neighborhoods, we found a stone gate outside a house and within the stone someone had carved “Falco.” My sister and I stood in front of the “Falco” stone sign and someone took a picture of us. Later, we told everyone that we found the home of our relatives! For awhile my sister and I kept to that story, but, eventually, told our family the truth. I’m a little embarrassed, but it was impossible to find our actual roots. So, my sister and I said to each other, “This is going to have to do!” It was kind of an innocent thing to do because we didn’t want to disappoint our family back in America.

Are there any Italian born actresses that have had a big affect on your acting career?

I admire many Italian born actresses who paved the way for us. The wonderful Italian actress Giulietta Masina was brilliant in La Dolce Vita and La Strada. The very last moment of La Strada when you make sheer eye contact with the character of “Gelsomnia,” played by Masina, is extraordinary. Throughout the film, Masina has maintained the fourth wall. All of a sudden, she breaks that wall by looking directly at you, her audience, and it knocks the wind out of you, me and anyone else watching the movie, I’m sure. Then, the screen goes black. I also admire Sophia Loren, who has done so many varied roles.

For the complete interview pick up Shut Up And Eat! written by Steven Priggé.