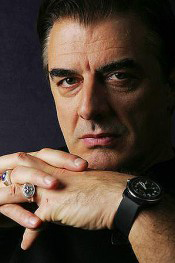 Chris Noth is one New Yorker who’s not only proud of his family ties to the Big Apple, but has made it the cornerstone of his professional career as well.  In 1990, Noth’s pace–setting role as New York City Detective Mike Logan on television’s original Law & Order series first put his acting career into high gear. Major made–for–television movies like Nothing Lasts Forever, Exiled, and Rough Riders added further luster to his list of solid credits. However, Noth’s unforgettable role as Mr. Big, the main heartthrob in the life of Carrie Bradshaw (Sarah Jessica Parker) on the hit HBO show Sex & The City earned the dashing New Yorker major recognition and new legions of female fans across the globe. Most recently, Noth has reprised his role as Detective Mike Logan, now on the highly popular Law & Order spinoff, “Criminal Intent.”

With varied interests beyond the entertainment industry, Noth stays active supporting numerous humanitarian causes. He’s devoted to drawing attention to the plight of innocent refugees from the threat of unexplored land mines in the third–world and makes frequent trips to Cambodia for this worthwhile humanitarian cause. Noth is involved with various environmental organizations such as Working Assests, Rainforest Action and VVAF (Vietnam Veterans of America Foundation).

New York remains Noth’s home base, and he’s currently a co–owner of The Plumm nightclub, as well as the restaurant The Cutting Room. In the following conversation Noth and I spoke in–depth about his love of Cajun style chicken, Ernest Hemingway’s “A Moveable Feast,” Tony Bennett, martinis, Sex & The City, and much more.

What are your most vivid memories of food from your childhood?

I grew up in Stamford, Connecticut. My parents moved there from Madison, Wisconsin because they came east to work in New York City. I was exposed to Manhattan from a very, very young age and I think that helped in developing my taste for food. I remember eating at a lot of steak houses and Italian restaurants, which served southern Italian food.

At home, we ate typical American fare. I remember the great barbecues my family had during my childhood. We ate pork chops, steaks, hamburgers, potato salad, fried chicken, corn on the cob and many other tasty things. As a kid, I would eat anything you put in front of me. The only thing I hated, and still do, is brussel sprouts.

Do you enjoy preparing a meal yourself?

I don’t cook as much as I once did, because I live in New York City and there are so many fantastic restaurants at your fingertips. When I was a struggling actor, I used to cook a lot, basically because it saved me money. I used the wok often. I would chop up a lot of garlic, onions, zucchini and then add some chicken. I would also go down to Little Italy in Manhattan, buy some pesto sauce and real homemade pasta. Then I’d cook a great, inexpensive Italian meal.

Can cooking be romantic?

Absolutely. I think a woman really likes it when a man is behind an oven.

Any bad eating habits you would like to get off your chest?

I eat way too fast. When I really love the food I’m eating, I tear into it like an animal. I have to learn how to slow down.

If you could play host to three actors from the past or present, who would you invite to your fantasy dinner?

We saw the urban, citified Chris Noth in a western, Teddy Roosevelt and The Rough Riders, filmed on location in Texas. Any fond memories of the food during that film shoot?

The best catering I have ever had was on that movie in Texas. They would serve fantastic barbecued catfish, brisket, salads and a lot of meat. The spiced up the chicken by preparing it Cajun style. I really liked that. Texans eat a lot of meat. They actually eat alligator. I’ll always remember the meals on that set being a series of great big feasts.

Do you usually dine with your castmates?

Yes, I do. I also like to dine with the crew. You eat like one big family usually cafeteria style and it’s a great camaraderie. I also like to eat off the set. When I was working on Sex & The City and Law & Order, they were both filmed in New York City. When we were shooting around Manhattan on location, I would eat at the restaurants that were close to where we were shooting. That is one of the wonderful benefits of doing a production in New York City.

For the unforgettable final episode of Sex & The City, you traveled to Paris. How do you like the food there?

The food in Paris is great. I recently came back from another trip to Paris and while I was there, I had some excellent escargot, pigeon and oysters. There are a lot of wonderful wine bars in Paris as well. I think the greatest book to read about food in Paris is Ernest Hemingway’s “A Moveable Feast.” It is one of the great cuisine books. He’s always describing going and eating in the cafes in Paris. It is delightful to read and then go there to search out some of those same places. In fact, La Closerie Des Lilas in Paris, which is mentioned in Hemingway’s book, is incredible. I think the food in Rome is fantastic as well.

What are some of your favorite things to eat at your New York restaurant The Cutting Room?

The food is definitely ‘hearty fare.’ We have a really tasty bison burger. I also love the little thin pizzas, especially the barbecue chicken pizza. The restaurant has great salads and salmon too. We make our own homemade relish and ketchup, which is really good. Our goal was to put The Cutting Room on the map of New York as a place that has a combination of good music, good food and an atmosphere that people really enjoy. Where are the places these days for adult New Yorkers to go to besides expensive restaurants? I would like to see more places in New York City like ours where adults can hang out.

You have a jukebox at the Cutting Room, which you actually program and select the songs. What are some of our favorites to listen to while you are eating?

I don’t like anything too loud that is going to interfere with my appetite. Tony Bennett is always nice. I also enjoy the trumpet sounds of Chet Baker. The jukebox at The Cutting Room is sort of an homage to music that myself and my partner, Steve Walters, grew up with. We were actually reaching out to an older crowd, but it turns out that younger kids love the music too.

The special drink list at The Cutting Room features exotic items like “White Hot,” “Mexican Vacation” and “Manhattanight.” Is this a reflection of your creativity?

We try to be creative and fun with the drink names. When I did the TV movie Bad Apple for TNT, we created “Bad Apple Martinis” for a party we had at The Cutting Room to launch the film. We have a new chocolate tequila that I hear is out of this world. I am personally happy with a good beer, a glass of wine or some vodka on ice.

When ‘breaking bread,’ is the company you’re with as important as the food?

I think the company you are with and the great conversation you have is a very important aspect to a good meal. When you talk about good food, you also must talk about the atmosphere. I like a restaurant that has character and intimacy. I like a disarming place that doesn’t have the trappings of a celebrity hangout. New York City offers the chance to have a true restaurant experience, because you go to a place where all of your friends are going to be and you just enjoy yourselves.

This article appeared in Bon Appétit Magazine and was written by Steven Priggé.