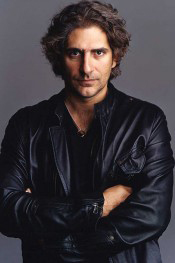 Michael Imperioli is a multi-talented actor who has appeared in over 30 films to date. Who can forget him in one of his earliest roles as Spider in Goodfellas, the “go-fer” who Joe Pesci’s character shoots for speaking out of turn? Imperioli has continued to act in popular feature films like Postcards From America, Bad Boys, The Basketball Diaries, Dead Presidents and I Shot Andy Warhol, just to name a few. He appeared in numerous movies directed Spike Lee, like Jungle Fever, Malcolm X, Clockers and Summer of Sam, which he also co-wrote.

For the last six seasons on The Sopranos, Imperioli has been brilliantly portraying Christoper Moltisanti, the hotheaded nephew of Tony Soprano. For his role, he has won an Emmy as Best Supporting Actor, as well as being nominated for a Golden Globe. In addition to his role as a cast member, Imperioli has written numerous memorable episodes of the show.

When Imperioli is not acting, he remains quite busy with varied creative endeavors. He is the founder and artistic director of the off-Broadway theater, Studio Dante, as well as being the lead singer and guitarist in the rock band “La Dolce Vita,” which in Italian means “The Sweet Life.” But, the married father of three finds that eating good Italian food and cooking for his family are among his most cherished pastimes.

When you grew up in Mount Vernon, New York, was it very Italian back then?

Definitely. In fact, a bread guy used to drive his truck through my neighborhood on his rounds and we used to buy fresh bread off the truck just like he was the ice cream man. My grandmother would buy a round loaf of Italian bread and it was even still hot. I find that bread is an important part of an Italian meal.

What are your childhood memories of big Italian meals with the family?

We had a very strong Italian heritage, especially when it came to eating. One side of my family was originally from Rome and the other side was from Naples and Calabria. On Sundays, we would always have a big Italian meal that would start at two in the afternoon. We would have macaroni, meatballs, bragiole, sausage and many other traditional foods. That Sunday Italian dinner happened pretty much religiously in my family. On holidays, we would eat seven courses of food. In fact, on Thanksgiving, not only would we have turkey, but we would have lasagna, too. On Christmas, our family would have tons of fish such as baked clams, shrimp scampi, fried baccala and then we would even add to that by having the baccala salad or the scungili salad. Those memories of my whole family eating together are something that I really cherish.

I know you really love to cook. How did the interest start and how daring are you behind the stove?

If I’m home and I’m not working, then I’m cooking. I began cooking around six years ago when I started having my own family. I’m married with three kids and I really love cooking for them. I think that I began cooking originally because I missed eating a lot of the foods that I grew up on. My wife is not into cooking that much and years ago, we were always rushing around getting take-out food. I honestly got sick of it and really missed a nice home cooked meal. So, I got some cookbooks and I asked my grandmother and my mother how to prepare certain Italian dishes. Soon, I found myself delving into cooking much deeper, wanting to know more and more. I don’t exclusively cook Italian food. I also cook other cuisines. When I first started cooking, I stuck to the recipes and really followed them exactly. After awhile, I became more daring and began to mix in some of my own ingredients to make the dishes even more exciting. I learned how to make a homemade barbecue sauce and I love it. It purely came out of improvisation in the kitchen. The sauce tastes great on pork ribs or beef brisket, whichever you prefer. Sometimes, I improvise based on what I have in cupboard that day. It might be at night and raining. Maybe I don’t feel like going to the store, so I’ll make due with what I have on hand and then wind up stumbling on to something good.

Does your family love your cooking?

Whatever and whenever I’m cooking, the very fact that all of my family is sitting around the table eating a homecooked meal is special and very important to me. I also believe that my kids really love it. Carrying on good traditions is important to children. I believe that a home where food is cooked has a very different life. It brings warmth to a home and a family. Memories from my childhood still come to me from certain food smells.

I know you guys like to joke around a lot on The Sopranos set. Do you have any funny food related stories from working with the guys?

I have a funny story. A few castmembers and I shot a scene for The Sopranos on a Friday. In the scene we had to eat meatballs. We ended up eating meatball after meatball after meatball. In fact, we ate so many meatballs that we came to the point where we wanted to shoot ourselves in the head. The next day, the same people who were in that scene, including myself, had to go to the Foxwood Casino in Connecticut to do a personal appearance. Foxwood’s got this great chef to fly in from a top restaurant in Florida to cook us a terrific Italian meal for our big night. The chef proudly announced to all of us, “I am going to cook you the greatest meatballs you will ever have in you life.” We all looked at each other and said, “Meatballs?!” It was hysterical. You couldn’t have written it better.

For the complete interview pick up Shut Up And Eat! written by Steven Priggé.