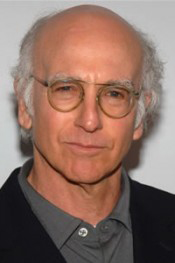 Larry David is one of the most successful writers in the history of television. Born and raised in Brooklyn, New York, Larry David started his career on-stage performing stand-up comedy in some of New York City’s top venues. He was discovered by producers at the famous comedy club, Catch A Rising Star, and was cast in the short-lived ABC-TV sketch comedy show, Fridays. David went on to write for Saturday Night Live during the 1984-85 season and became frustrated when only one of his sketches was put on-air. In fact, he quit his writing job at Saturday Night Live on a Friday, but went back to work on the show that following Monday pretending it never happened. Sounds familiar? That became the basis of a classic episode of Seinfeld where George Costanza actually quits his job and returns to the Monday morning staff meeting like it was all a big joke.

In 1990, David co-created (with Jerry Seinfeld) the mega-hit sitcom, Seinfeld. David wrote for that series from 1990-96 and returned to write the series finale in 1998. David was nominated for Emmy Awards seven times for his writing on Seinfeld, and won in 1993 (“Outstanding Individual Achievement in Writing in a Comedy Series”) for the episode “The Contest.” He also shared an Emmy in 1993 for “Outstanding Comedy Series”. Two Writers Guild Awards for “the contest” and the other for “mango.” In 1999, David wrote and starred in Larry David: Curb Your Enthusiasm, a one-hour documentary special for HBO, which spawned the critically acclaimed HBO series the following year. Curb Your Enthusiasm is currently heading into its sixth season.

What television shows during your youth have an affect you?

My favorite show, and I have said this before in interviews, was Sgt. Bilko, starring Phil Silvers. I think I liked it because the worst characteristics of Sgt. Bilko were revealed to the audience in an always humorous way. He was conniving and self-centered, but you just loved him, anyway. I never missed that show as a child and got all the humor at a very young age. Oh, and did I mention he was bald?

Were you writing from early age?

I did not do a lot of writing as a child, except to make up book reports for school, so cheating was my first foray into creativity. By the way, the word “creative” was not bandied about in my house. We were raised to make a living, not “express” ourselves. I did not really start writing dialogue until I wrote the screenplay for a feature film in 1978. The screenplay was a comedy about the explorer, Ponce de Leon, who went looking for the fountain of youth. Could that be possible? Did an explorer actually approach Queen Isabella and King Ferdinand and ask them for ships so he could look for the fountain of youth? And they said yes. Sure. Go ahead. To me, that’s fascinating. I could talk about it for hours. What about the crew? What did Ponce tell them? How could they take orders from this nut?

Did you study writing in college?

I went to the University of Maryland and I didn’t really do any writing there. I was kind of a screw-off. I always took the easy way out by studying for tests at the very last minute. I was lazy, as most comedians are. Comedians are lazy people. We don’t even like to pee. It’s a schlep. It takes time. Who needs it? Most comedians don’t even work on their material. If something occurs to them, they’ll write it down, which in and of itself is work. Oh no, I have to take my pen out and write this down. Why did I have to think of this?

You have probably told the story a million times, but how did Seinfeld originally materialize?

Jerry told me NBC wanted to do a show with him and asked me if I had any interest in working with him. We were splitting a cab across town, but before we got into the cab, we went into a grocery store to pick up some stuff. We started talking about the products in the store. It was the kind of conversation that you never heard on television between two friends. We both thought it contained the initial beginnings of a show and that was the genesis of Seinfeld.

The origins of Curb Your Enthusiasm are a little bit different. After Seinfeld ended, Jeff Garlin, who plays my manager on the show, asked me what I was working on, and I told him that I was seriously thinking about going back into stand-up comedy after a ten-year hiatus. Jeff said, “You should film it.” At first I was reluctant, but my wife and Jeff talked me into it. The question for me was, “What are they going to film?” I could visualize them filming when I am on-stage and maybe briefly off-stage, but what else are they going to see in this so-called documentary. I then thought I would probably have to make up some stuff so that we have a story going. Otherwise, I felt it would be terribly boring. So I wrote an outline, which required a wife, and I couldn’t use my real wife, so I cast someone in the role. I then needed a manager and I asked Jeff to play the part. Of course, since it was supposed to be a documentary, it needed to be filmed like one. So, there couldn’t be a script. It had to be improvised. At some point during the filming of this documentary, we realized it had potential to be a series.

The pitching of Seinfeld was very similar to the episode we did where Jerry and George are pitching their sitcom, which is essentially about “nothing.” We were telling the executives our ideas and we told them it was a one-camera show. NBC saw it as a three-camera show. I told them that’s not what this show is about. I remember getting some very strange looks from the Castle Rock Executives who were in the room when, like George, I said, “This is not the show.” Anyway, I eventually submitted to the multi-camera format.

For Curb Your Enthusiasm, it was, again, pitched as a documentary of me going back to do stand-up after a ten year hiatus. The day we pitched it, HBO bought it as a special right there in the room. When we finished the documentary, Chris Albrecht at HBO approached me about doing it as a series.

For the complete interview pick up Created By: Inside the Minds of TV’S Top Show Creators Written By Steven Priggé.