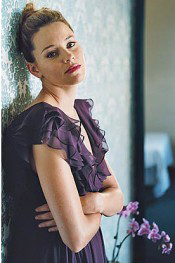 I really responded to the love story in the script. I think Kevin is a giant romantic. It also represented the opportunity to play a really well written, authentic, funny woman, which is very rare. I think any actress in Hollywood is looking for that right now.

I was prepared to shoot the film naked with the understanding that my bits and parts would be covered mostly by Seth. I wasn’t really worried about it. Kevin had always thought that he was going to focus the moments in the movie on our emotions rather than on the physical. He had an epiphany before we started filming and decided for us not to take our clothes off. I think he felt he was going to be more uncomfortable with us being naked around him rather than us feeling uncomfortable about being naked.

Underneath the funny and raunchy moments in this film, there’s definitely a heartwarming love story.

We set out first and foremost to make a really funny movie. That was the number one goal. The secondary goal was to have a really great love story. We wanted to make a romantic comedy in the best sense of those two words. Anytime the story got really emotional we undercut it with something outrageous – a combination that made this special.

Do you think women will want to see this movie?

It’s a great movie for the ladies. I think Mary is a really great character. When you leave the theater you will have a giant grin on our face.

You have great chemistry with your co-star Seth.

No, I’m very good at making money. I have been making money since I was 11 ½ years old, when I first started working at the Catholic Youth Center in Pittsfield, Massachusetts. I think there are other ways for these guys to get out of this circumstance, but sometimes it’s that outrageous solution that you feel will invest your life with some zest. I think they were looking for something more than just getting out of their financial problems. They were looking for a purpose in their lives.