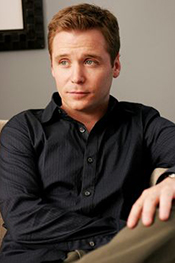 In Entourage, Kevin Connolly’s character “E” stays busy managing the career of childhood friend and star Vincent Chase. Week after week, he navigates the treacherous waters of Hollywood, dealing with Vince’s ego-driven agent Ari and his tough-as-nails publicist Shauna. But in his latest project, Connolly enters the most treacherous waters of all—the dating pool. He’s Just Not That Into You (based on the bestselling book of the same name) boasts a cast of Hollywood heavyweights: Jennifer Aniston, Ben Affleck, Drew Barrymore, Jennifer Connelly, and Scarlett Johansson, just to name a few. I spoke with Connolly about the new flick, his worst date ever, plans for the future, and more.

Tell me about the character you play in He’s Just Not That Into You.

Connor is an up-and-coming real estate agent who is at that point in his life where he is looking to settle down. He is head over heels for this girl played by Scarlett Johansson who, at the end of the day, doesn’t feel the same way about him. While he looks good on paper for her, it’s just not sort of there. The name of the movie is He’s Just Not That Into You, but Connor is the only one where she’s just not that into him.

How did you prepare for this role?

When you are going into work with such heavyweights, the preparation was just being prepared. You want to know your lines, know what the scene is about, and feel like you belong. I just did my best not to be the weak link in the chain because there are some real actors there—Jennifer Aniston, Jennifer Connelly, and the list goes on and on.

Do you feel there are any similarities between Connor and your character “E” on Entourage?

Obviously, when you’re on a TV series and people know you in a certain role, it’s a concern you have when you do another project to not feel like you’re watching your character on the show. Personally, from a selfish standpoint, that was one of the things that I was most pleased about with the movie. I didn’t feel like I was watching E. Now, it’s not like I have an eye-patch and a walking stick—I obviously look the same. But I think that it is different enough.

Did you read the book that the film is based on?

I had a high awareness of the book. I had an ex-girlfriend who had the book on her nightstand. We would lie in bed watching television, and she would be reading it and would start asking me weird questions. I said to myself, “What is she talking about? I got to take a look at this book.” So, I had read a little bit of it before the movie came around. When I got the role, I went through and read the whole book.

Your co-stars are the beautiful Drew Barrymore, Scarlett Johansson, and Ginnifer Goodwin. Was it really hard to go to work every day?

It was a pleasure. On my first day, I had to kiss Drew, which was fun. The first day that I worked with Scarlett, we had a post-sex scene in bed. By the way, that’s not all it’s cracked up to be. I was a nervous wreck. Strangely enough, I couldn’t wait for it to be over.