Shut Up and Eat! 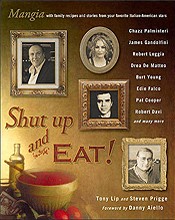 Your favorite Italian–American actors may play tough on-screen, but off screen they have a weakness for one thing—Italian food! Now you too can share their passion, and some of their family recipes that have been passed down from generation to generation.

Shut Up and Eat! features a who’s who list of famous Italian–Americans active in Hollywood including…

*Chazz Palminteri (A Bronx Tale, Usual Suspects)
*Dominic Chianese (The Godfather, The Sopranos)
*Burt Young (Rocky, Once Upon A Time In America)
*Edie Falco (The Sopranos)
*And many more.

These well-known stars also tell personal stories of growing up Italian that will take you back to your own mother’s kitchen. The stories are heartwarming and hilarious all at the same time. The actors’ also give behind the scenes tales from working on the sets of such classic movies as Goodfellas, Casino and The Godfather. Plus there’s a special foreword written by Academy Award-nominated actor Danny Aiello. Between the covers of the unique book, the recipes are simple classic Italian fare. The hearty cuisine that will bring you back to your childhood.